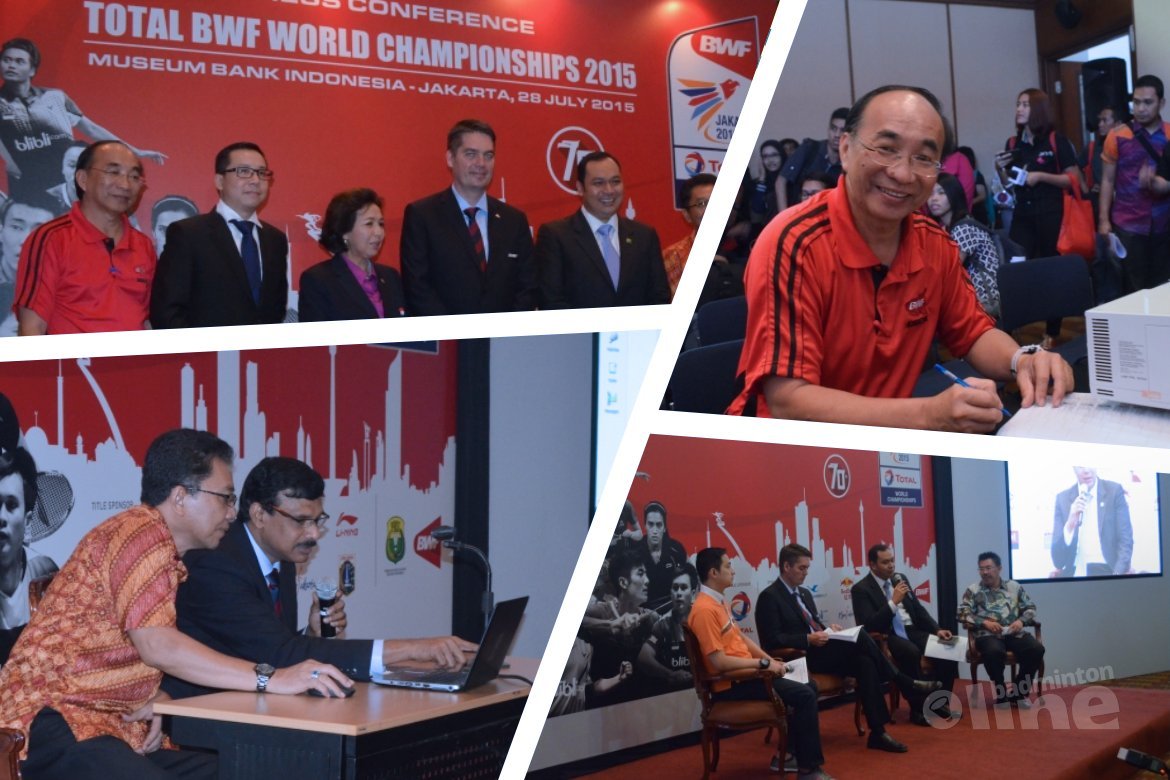 With a few clicks of the mouse, a multitude of possibilities resolved into certainty during the draw ceremony of the Total BWF World Championships 2015 in Jakarta today.

The draws in all five categories were done by software but the finishing touches were applied by BWF President Poul-Erik Hoyer (for singles); Achmad Budiharto, Deputy Secretary General of PBSI (for Mixed Doubles); Rita Subowo, Chairperson, National Olympic Committee of Indonesia (for Men's Doubles), and Christopher Kasibi, GM, Retail & Marketing of Total Indonesia (for Women's Doubles).

One of the main points of interest around the Men's Singles draw was whether the erstwhile No.1, the unseeded Lee Chong Wei of Malaysia, would run into any of the strong contenders - particularly the top seed, Chen Long, or his predecessor, Lin Dan - in the early rounds of the tournament. That possibility was averted with China's Chen and Lee separated in the two halves, with the defending champion appearing to have a smooth path into the quarter-finals.

Chen is likely to meet No.16 seed Rajiv Ouseph (England) in the third round and No.7 seed Viktor Axelsen (Denmark) in the quarter-finals. Axelsen had given him a tough time in the final of The Star Australian Open, and Chen will be wary of the young Dane, should the two meet. Axelsen himself has a possible third round against India's HS Prannoy (11).

Japan's Kento Momota (4) is headed for a semi-final in the top half if he can survive the likes of India's Kashyap Parupalli and Chinese Taipei's Chou Tien Chen.

No.2 seed Jan O Jorgensen (Denmark) has a difficult draw, for he starts his campaign against the wily Boonsak Ponsana of Thailand and is then due to face No.9 seed Son Wan Ho (Korea) in the third. Next up could be the five-time World champion Lin Dan (China), who is the same half as familiar rival Lee Chong Wei, but in a different quarter. Lee will face Lithuania's Kestutis Navickas in his opener and possibly Marc Zwiebler (Germany) in the second, followed by Wang Zhengming (China, 8) and Kidambi Srikanth (India) in the quarter-finals.

"I can see that there are many good matches and I'm looking forward to being there as a fan and as a spectator. There are some tremendous matches from the first day. There will be disappointments, but also a lot of joy."

Hoyer had a special word for the fans who are expected to throng Istora Senayan, venue of the World Championships.

"The environment around the tournament is vital. It's about having a very cheerful time on the spectator seats. That will happen for sure, that's what Indonesia is capable of delivering, and it helps the players lift their game and it helps us present ourselves at the highest level."

Women's Singles defending champion Carolina Marin (Spain, 1) will be pleased with her draw. Her first big test would be China's Wang Shixian (7) in the quarter-finals.

Two-time runner-up Li Xuerui (China, 3), who is in the top half with Marin, has a bye in her opener and will expect to run into India's PV Sindhu in the third round, followed by either Sung Ji Hyun (Korea, 8) or Nozomi Okuhara (Japan, 9) in the quarter-finals.

Men's Doubles defending champions Shin Baek Choel/Ko Sung Hyun (Korea, 7) have a minefield ahead of them, with the possibility of a second round against Malaysia's Goh V Shem/Tan Wee Kiong and Liu Xiaolong/Qiu Zihan (China) in the third. No.2 seeds Mathias Boe/Carsten Mogensen (Denmark) might be their quarter-final opponents if both pairs don't suffer any mishaps.

Top seeds Lee Yong Dae/Yoo Yeon Seong (Korea), however, can look to ease into the competition, but a third-round clash with compatriots Kim Gi Jung/Kim Sa Rang is a near-certainty. In the same quarter are the in-form Chinese pair Fu Haifeng/Zhang Nan.

Local heroes Mohammad Ahsan/Hendra Setiawan (3) will have to contend with the likes of Kenta Kazuno/Kazushi Yamada (Japan) in the third round and Lee Sheng Mu/Tsai Chia Hsin (Chinese Taipei) or Mads Conrad-Petersen/Mads Pieler Kolding (Denmark) in the quarter-finals.

Former and current champions face off

Denmark's Christinna Pedersen/Kamilla Rytter Juhl are in the same quarter as China's Ma Jin/Tang Yuanting and Korea's Lee So Hee/Shin Seung Chan. No.2 seeds Luo Ying/Luo Yu (China) have a relatively smooth draw and will expect to get the better of opponents like Vivian Hoo/Woon Khe Wei (Malaysia) in the third round and Miyuki Maeda/Reika Kakiiwa (Japan) in the quarter-finals.

In the bottom half, second seeds Xu Chen/Ma Jin (China) will eye a quarter-final against compatriots Lu Kai/Huang Yaqiong (6), while their compatriots Liu Cheng/Bao Yixin (4) are likely to have a harder time making the quarter-finals, with pairs like Chris Adcock/Gabrielle Adcock (England, 7), Riky Widianto/Puspita Richi Dili (Indonesia, 10) and Mads Pieler Kolding/Kamilla Rytter Juhl (Denmark, 13) in their path.

Doubles legend Ricky Subagja, Director of the PBSI's National Training Centre, analysed the draw of the Indonesian contenders and was hopeful of some rich pickings.

"All the expectations are on Men's Doubles (Mohammad Ahsan/Hendra Setiawan and Angga Pratama/Ricky Karanda Suwardi) and Mixed Doubles (Tontowi Ahmad/Liliyana Natsir), but you cannot rule out the Women's Doubles pair of Greysia Polii and Nitya Krishinda Maheswari. The team is ready; preparations have been very good. Targets are not a burden, because even players whose targets were not set should be able to deliver."