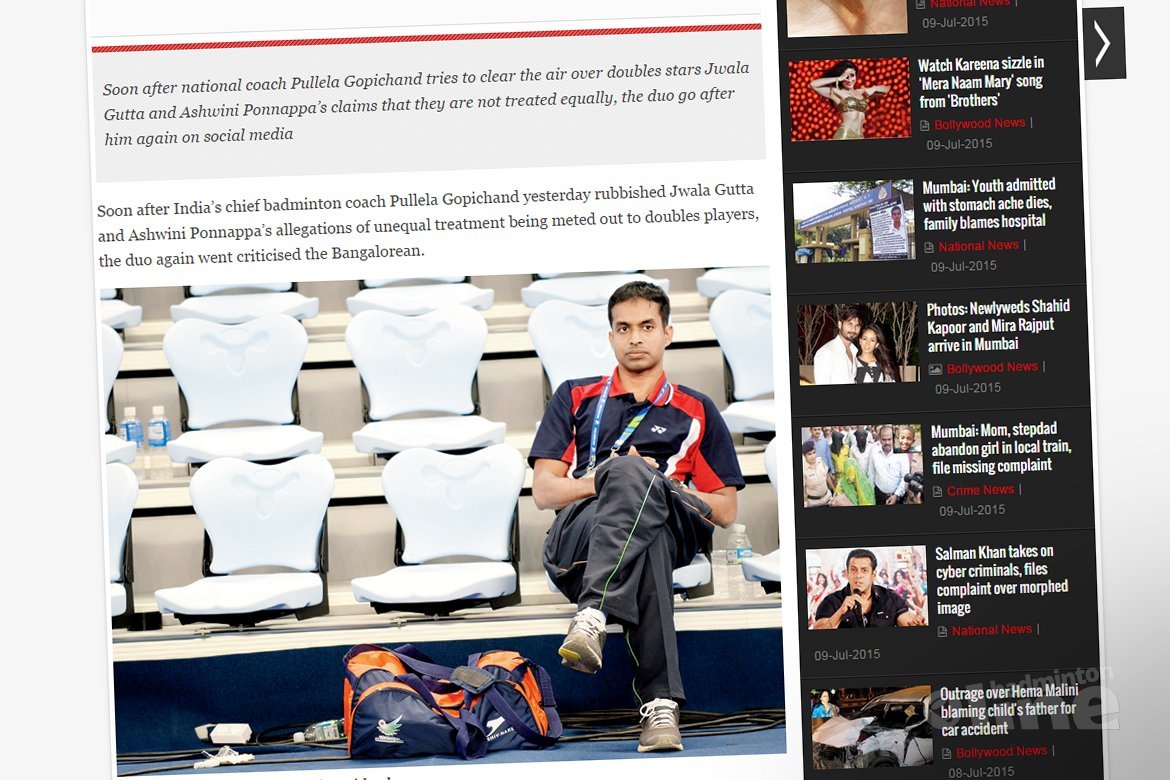 Soon after national coach Pullela Gopichand tries to clear the air over doubles stars Jwala Gutta and Ashwini Ponnappa's claims that they are not treated equally, the duo go after him again on social media.

After their recent win at the Canadian Open, Ashwini and Jwala had urged Gopichand to treat all badminton players equally or step down as national coach, referring to their exclusion from the Target Olympic Podium (TOP) scheme, that funds potential Olympic medal-winners.

Gopichand yesterday said that the women's doubles pair do get all support from the (Badminton Association of India (BAI) and Sports Authority of India (SAI).

"It's too often that they've been saying this. They need to be specific about their issues. Whatever tournament they have been playing, they have been supported by SAI, BAI and the government of India.

Whatever support they have asked, has been given, they've played many tournaments. Jwala and Ashwini are part of the camp, which is supported by BAI and SAI. Under the TOP scheme, it was said that as a joint program for singles, we will support singles players as a group. So four players were picked then. Similarly, doubles as a group will be supported in the scheme. There are other doubles players like Manu Attri and Sumeeth Reddy, who reached the finals of a Grand Prix Gold event, they didn't get their due credit. There's also Sikki Reddy and Pradnya Gadre, who did well at the nationals. They are happy with the support they are receiving."

Gutta and Ponnappa immediately took to Twitter to react to Gopichand's comments. "I'm kinda shocked. So are we part of TOPs? How come we have no news about it? Comparing our world bronze medal to a Grand Prix runner, and comparing us to one-time national champions? What can I say? CWG Medals, world medals asian medal...all thrown aside," wrote Gutta.

Ponnappa said all the players mentioned by Gopichand were part of his academy. "Speechless! Incidentally, the said players are all from the academy and benefit from all the funding going there. I wonder why and how that's possible, if there was fair treatment & no bias," she wrote.