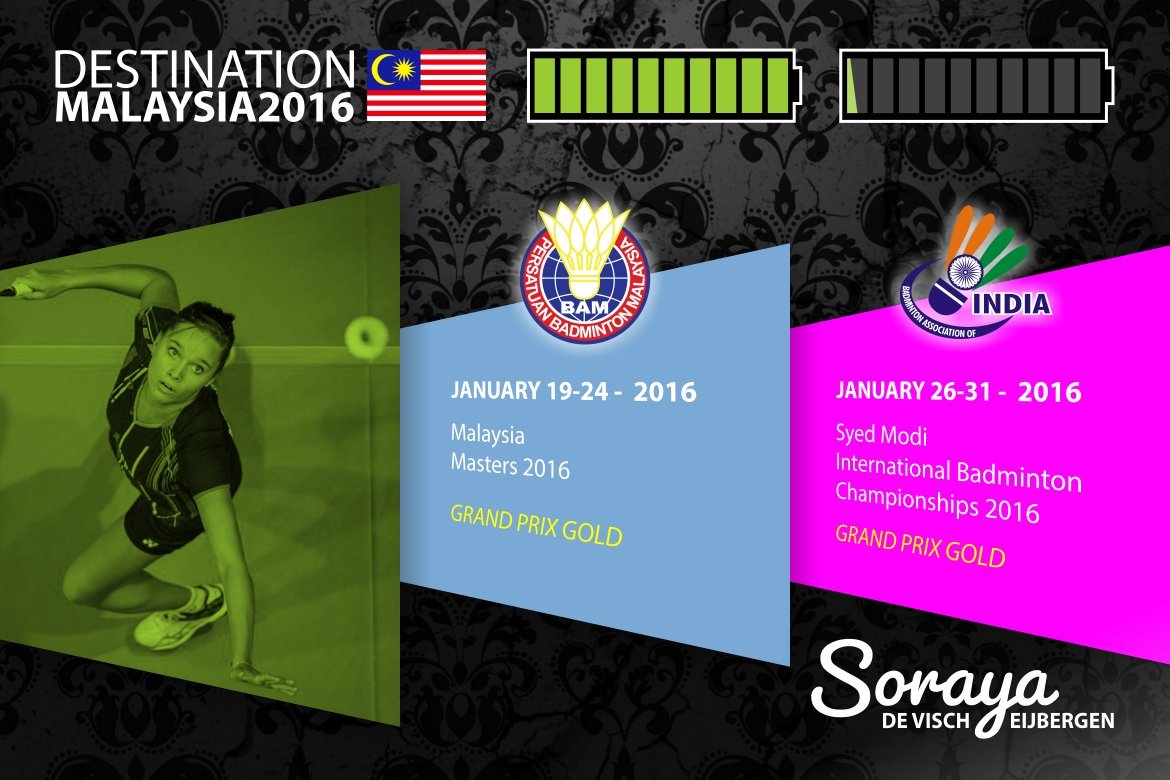 After thorough deliberation and taking into consideration the advice of both the technical and medical staff of the high performance program here in Papendal, I've decided to make an important change in my tournament schedule.

As this impacts the crowdfunding goal, I feel transparency about this choice is both necessary and respectful towards those who've supported and are supporting me.

Instead of playing in the Malaysia International Challenge 2015 (10-15 November) I will compete in the Malaysia Masters 2016 (19-24 January), a Grand Prix Gold event in Penang.

Why do I make this change?

By opting for the January tournament (which is a higher level) I am able to also participate in the Syed Modi International 2016 (26-31 January) in India, another Grand Prix Gold event. Playing in these two tournaments will cost only marginally more than what I originally crowdfunded for. This will let me kill two birds with one stone.

Of course, I make certain to emphasize that - whenever possible - I do not let financial restraints dictate the course of my career as a professional athlete. A switch in tournaments like this is part of a bigger picture. As I've alluded to in my Tuesday-post this week I want to improve my overall fitness and put in more on-court practice. This explains why I'm taking a short tournament break, so I'll return better and fitter.

Going to Malaysia (and India) in January next year instead of next month, allows me to enjoy and make use of the coaching abilities of national coaches Rune Massing and Kim Nielsen during those tournaments. They'll be present there due to the Road-to-Rio schedule of our top double players.

Reboot of my crowdfunding campaign

While I've already reached the 100% mark in my campaign, I've consciously kept the donation window open. Adding the India Grand Prix Gold to my roster involves an extra investment, but I feel the additional Asian experience is well-worth the extra effort.

If you are interested in supporting my ambitions, I again welcome all of you to consider a visit to my campaign at sorayadve.nl. The campaign closes in three weeks from now and I've added some new rewards! (The campaign page will be updated accordingly.)

For those outside The Netherlands: send an e-mail to info@sorayadve.nl with subject line 'crowdfunding' and you'll receive information about how to make a donation from abroad.