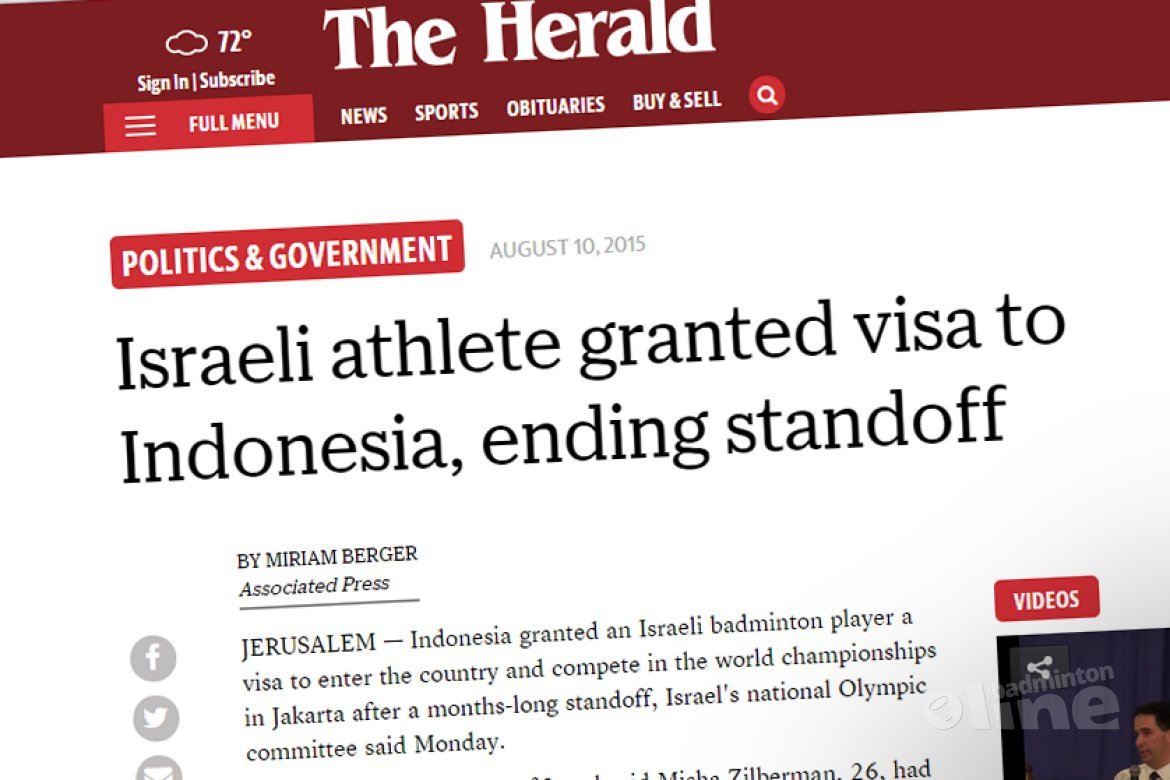 Indonesia granted an Israeli badminton player a visa to enter the country and compete in the world championships in Jakarta after a months-long standoff, Israel's national Olympic committee said Monday.

The Olympic Committee of Israel said Misha Zilberman, 26, had been cleared to enter Indonesia - the world's most populous Muslim country - after being repeatedly denied a visa because he is Israeli.

OCI secretary general Gili Lustig said Zilberman had been waiting in Singapore for two weeks after making an initial visa application six months ago. He said the Badminton World Federation intervened to ensure Zilberman could secure a visa.

Zilberman was scheduled to fly from Singapore to Jakarta on Monday accompanied by his mother, also a badminton player, as well as the CEO of the Badminton World Federation, Lustig said. Zilberman is set to compete on Tuesday.

Lustig said the visa delay had prevented Zilberman from properly training for the championships.

"But for us it's a big victory that he will be there," Lustig said. "Now he's an ambassador for Israeli sport."

In a post on his Facebook page on Aug. 3, before he was granted the visa, Zilberman voiced his dismay with the visa denial.

"They won't give me a visa to participate in the world championship!!" he wrote. "After six months of exchanging letters, and after sending all the documents they requested, and after we arrived in Singapore, they are saying no."

Israel does not have formal diplomatic relations with Indonesia and many other Muslim-majority countries, some of whom have denied Israeli and Arab Israeli athletes visas to compete in the past.

Zilberman competed in the 2012 London Olympics, the first Israeli badminton player to represent his country at the games. He has won numerous badminton competitions in Israel, including mixed doubles with his mother, who is also his coach.